Showcase of the movement and the level designed

Added a Main Menu and sound into the game

Added difficulty with more  wolves when you reach goal and reset.

Added User interface elements In-game : (Mini-map, placeholder for stats and ability's and a menu to restart or go to back to the Main Menu)

Added a way to loose the game

Adjusted the hit box with the wolf and rabbit

Added Mana and prepared the field for future spell

All spells are now functional

Added UI(user interface) for lost and Game Over

Added a bit of rocks and grass for a pretty effect

Added a toggle for keyboard control to move with arrow keys

Redid spells to be able to click to activate them instead of only pressing the Q,W,E keys

Added White Wolf that will follow player around at difficulty 2

Added Traps, if white wolf trigger on trap he will go back to his den until the next night

Added Victory Scene after reaching the middle carrot at difficulty 3 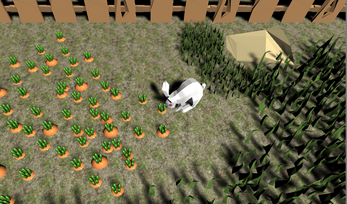